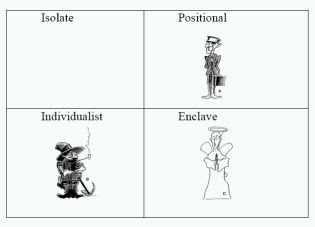 A few days ago I presented Mary B. Anderson's grid for analysing work on conflict. Another favourite four-square box is by the late anthropologist Mary Douglas and political scientist Aaron Wildavsky. It visualises Grid and Group Cultural Theory, which I find highly relevant to social development. I first came across this model in Douglas's polemic "Traditional culture - let's hear no more about it", delivered at a World Bank Symposium on "Poverty and Culture" (2002). Douglas rejects the idea of culture as a form of collective thinking which, in its "traditional culture" incarnation, is assumed to hamper development and rational economic behaviour. She points out that thinking is an individual act.
She distinguishes four universal types of culture on the basis of two factors: "group", on the horizontal axis, stands for the extent to which people's lives are controlled by the group they live in, and "grid", on the vertical axis, is a measure of structure. In A History of Grid and Group Culture, Douglas explains: "At the extreme top right, strong on grid, strong on group, will be a society in which all roles are ascribed, all behaviour governed by positional rule, all the constituent groups contained within a comprehensive larger group." The society at the bottom right corner is also strongly bounded, but much less structured - a place for dissidents, e.g. religious sects. The top left "has strong grid controls, without any group membership to sustain individuals. Prisoners might be located here, or slaves and any strictly supervised servants, soldiers, or the very poor, or the Queen of England, hedged around as she is by protocol". Arguably, development is about supporting people to get out of that grid - well, maybe not for the Queen. Then again...
Posted by Michaela Raab at 16:04